You call that a vacation?

So we're just back from Disney World...I have two things to say. First, we paid ten bucks for a balloon. One balloon. And second, the only billboard between the Magic Kingdom and the airport that was not for a theme park? It was for www.vasectomy.com.
Posted by Tina Cassidy at 3:41 AM 9 comments:

About 10 weeks after Harrison was born at home, my mother asked me to come down to Bellani Maternity, a boutique near her house, to watch a screening of "The Business of Being Born," Ricki Lake's new documentary, for which I was interviewed. What was special for me about this night was that my grandmother and my sister-in-law would be coming, too. Before we watched the film, my mother and I added up all the births among the surviving women on our one side of the family. My grandmother had three children. My mother two. My aunt 2; her daughter, 1; my sister-in-law, 1; and I had two. Out of those 11, 10 births were either horrendous, cesareans, or extremely painful. Only one birth was absolutely without complications and would be remembered for how simply wonderful it was -- the one that happened at home, with a midwife, my second child. Although my mother finally understands why hospitals can get in the way of childbirth, the results of our little mathematical exercise was still surprising. After the film, I mentioned the family statistics to my grandmother, who was unconscious during her births thanks to Twilight Sleep, and I think for the first time she, too, understood that birth could be better if we left it alone. It was a small triumph.
Posted by Tina Cassidy at 6:40 PM 11 comments:

Our midwife came to check on us three times after the baby was born, each time staying for more than a hour, weighing the baby, giving me a once-over, talking with the older boys. From a service perspective, it was downright luxurious, not having to dress a newborn and head out to a doctor's office in the freezing cold. This postpartum care was included in the fee we had to pay out-of-pocket for a home birth -- a cost that our premium insurance policy does not cover even though we are fully insured. Just because it happened at home. Knowing that insurers had spent $25,000 for my cesarean four years ago, and had just spent $11,000 for my cousin's vaginal birth in a hospital (she was later readmitted for infection but that was a separate bill), the thought that the insurance company could pay a fraction of those costs and have better outcomes and happier moms is nonsensical. It's a very dysfunctional system.
Posted by Tina Cassidy at 7:23 PM 12 comments:

I guess you can consider me the home-birth husband. When Tina first suggested it, I wondered if there was a middle ground -- a birth attended by a midwife in a birth center. No such thing, she reminded me, in Massachusetts. I then said a home birth is one thing, but a home birth VBAC sounded hard-core. Wrong again, as our wonderful midwife explained; no particular issues there. Then why don't hospitals do VBACs? A questionnable study, insurance, and lawsuits. Such was the process of my re-education. I learned I had to buy-in 100 percent and nothing less. No emphasis on the back-up plan, transport to the hospital if 'something goes wrong.' No dwelling on something going wrong. So when it was clear that Tina was in labor that Friday night, I felt disciplined, and was thinking positive, which helped me be less nervous. Although I did want the midwife to be there the minute after the first strong contraction. In retrospect I thought maybe I put my heart and mind in the hands of the midwife in the place of the doctors at the hospital -- the new expert to calm my fears -- but that wasn't really what happened. She came, I parked her car, she had a suitcase of stuff, and she went to my wife. The next two hours were between Tina and her. I fetched things and paced around the tub I had set up. After reading Tina's book, I was at peace with a man's minimal role. I caressed her forehead but it didn't seem like she was too aware of my doing so; she was busy, in the zone. It was an incredible athletic event, and I didn't feel like saying 'You're doing great' or any such thing, any more than it would be effective to say something encouraging to Derek Jeter ranging for a sharply hit ground ball. Maybe I was in a trance, but I even went along with the gag on the whole thing happening in the water. My surprise was that it was a boy. I was impressed by how attentive the midwife team was on checking Harrison out, and examining Tina -- checklists, all very thorough. I had no idea there was any kind of issue about the placenta and didn't worry at that stage, either. When it was delivered the midwife showed me what an ingenius contraption it was, sustaining Harrison for 39 weeks. It was a cold night, and I remember thinking, all they had to do was move one room over, mother and child. We were home.
Posted by Tina Cassidy at 6:03 PM 212 comments:

Once labor and birth were finished, the reality of being at home really kicked in. The midwife weighed Harrison (7 pounds even) in a sling right by my side. She did her check up of him beside me on the bed. There were no heel pricks. No Hep B vaccines. No sugar water on the tongue. No discussion of circumcision. No incubator. No one saying they were taking him away for a bath.

My husband rummaged through the dark to find the baby something to wear -- no standard issue hospital garb. I jumped in the shower and gingerly got back in bed. My husband made me a sandwich and brought me a big pitcher of water to slake my thirst and we toasted the midwives and Harrison with some champagne and cake, which the midwives ate downstairs to give us time alone.

Harrison was born at 5 minutes past midnight. The midwives stayed to check on us all until close to 4 a.m., when they finally said goodbye, with assurances of a visit later in the day. We were too excited to fall asleep, and stayed in bed marveling at the baby. At 5:30, our 4-year-old came in and did a double take when he saw his new brother in the bed. It was like Christmas morning. He crawled in with us and we all stayed happily together until my parents, grandparents, aunt and cousin arrived with breakfast. It felt so great having them all there at the house, knowing they could stay as long as they wanted. My 85-year-old arthritic grandfather endured a long car ride, and even climbed a big flight of stairs to the bedroom, to see Harrison. He scooped up the baby and there we both cried. My grandfather was the one, throughout the entire decision to have a VBAC at home, to support it vocally. Having served on New Guinea during World War II, he saw many indigenous women give birth there. That exposure made him appreciate, respect and understand the process in ways that my grandmother and mother -- who had never known birth outside a hospital -- could not. I was grateful for his support. And loved that he could be there that morning.
Posted by Tina Cassidy at 6:19 PM 19 comments:

I still have a fair amount to say about my home VBAC. For starters, a faithful reader of this blog asked me if I was worried about having a placenta issue, since a prior cesarean can cause the placenta to adhere to the scar or even implant through the uterus -- both serious problems. The short answer is no. Despite having researched such problems while writing my book, a sort of haze effected my brain while I was pregnant and I thought nothing but positive thoughts, perhaps reinforced by my ever positive midwife. So, even when she seemed slightly concerned that the placenta was not coming out quickly, and told me to get on the bed and push, I was not worried. And sure enough, it all came out smoothly, in one piece. And when the weather turns nice, it will be taken from the freezer (it's wrapped in a towel in a Ziploc bag beneath some ice cream sandwiches the boys love) and buried in the backyard. Mom, are you rolling your eyes?
Posted by Tina Cassidy at 7:22 PM 15 comments: 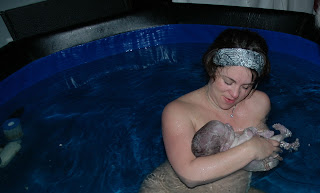 This is Harrison. And me. If you look closely, you can see that the cord is still not cut. We waited until it stopped pulsing and it was tied off with a string. Still no sign of that placenta. So after what seemed like an eternity holding Harrison in the tub, the midwife told me I should get out, and let gravity help expel the afterbirth. I felt a little wobbly in the knees. I handed the baby to my husband, climbed out and walked to my bed, which I had made up like a layer cake of sheets and shower curtains.
Posted by Tina Cassidy at 6:09 PM 9 comments:

One more contraction, and our baby was out, a successful and stunningly uplifting home VBAC.

"It's a boy!" the midwife said, her first words in a long while, as his body popped up to the surface.

Although his head had emerged with the cord wrapped around his neck, the midwife had reached into the birth tub to check on him, felt the cord pulsing, and knew he was OK. All through the two hours I spent kneeling in the water, she never once told me to push. And I never did. My body did the work on its own and I let everything take its time. I think the reward was in not needing a single stitch.

I sat in the tub holding him, transfixed, looking in his dark eyes, his hair curled from the wetness. He was breathing just fine, very alert, not crying, checking out his new bedroom, moving his eyes across the room. His body, covered with creamy vernix, was incredibly soft and I held him close. He took to nursing like a champ. My husband finally decided it was OK to take a picture (maybe I will post one tomorrow)and we all rejoiced in the moment.

A couple minutes later, our second midwife, who had gotten caught in a construction tangle on the turnpike, arrived -- deflated she had missed the birth.

All seemed well. But where the heck was the placenta?
Posted by Tina Cassidy at 5:54 PM 11 comments: