Episode Three of PBS’ 'Call the Midwife' was another great show, with two interesting points relevant to the history of childbirth. (You can read my takes on Episode One and Episode Two, as well.)

First, an exuberant expectant husband who is craving information about his wife’s pregnancy comes home with a book written by Grantly Dick-Read (below), a British doctor who, like the midwives in the show, rode around London’s poor neighborhoods on his bike in the fog to help deliver babies. This was after World War I. Having grown up in the country surrounded by farm animals, he watched many mammals give birth and approached a woman doing the same without the fear that many other first-time mothers – and even obstetricians – brought/bring to the process. He considered birth normal, not an accident waiting to happen. His first book, Natural Childbirth, was published in 1933. His second book, commonly called Childbirth Without Fear, came out in 1942 – right at the time of America’s great migration of birth moving from the home to the hospital. Many women, however, were shocked by how they were treated in the maternity ward, and they embraced Dick-Read’s second book like a bible for how to have a natural birth.

He arguably set the stage for the natural childbirth movement in American in the 1960s and ‘70s, though doctors Bradley and Lamaze are more often associated with that time.

The second point of interest for me in the show was the midwife’s use of a Pinard horn (below), a low-tech but effective instrument for listening to the baby’s heartbeat.

Even today, midwives like to use these – or the fetoscope (below) – because they don’t pester the baby with bothersome noise like that which ultrasounds make in-utero.

Posted by Tina Cassidy at 3:00 AM No comments:

Breeches and rickets: Lessons from Episode Two of the PBS Series Call the Midwife

Episode Two of PBS’ Call the Midwife gave us two births that most contemporary pregnant women don’t have to deal with. (You can read my post on Episode One here.)

The show included a woman with rickets, which is a vitamin D deficiency that was common among poor women who did not have a proper diet. The affliction can cause bones to bend – often noticeable in bowed legs, as in below – but can cause the pelvis to be misshapen as well. Sometimes the deformity could be so bad that there was no way for a baby to be born vaginally. 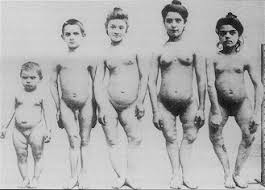 The mom in Episode Two had had a fatal outcome with a previous pregnancy but was able to have as c-section this time around thanks to the National Health Service covering the costs. If there is ever a time for a c-section, that would be it.

The other interesting birth was a breech, shown coming out “ass first,” as nurse Chummy (below) deadpans during the delivery.

The scene shows how breeches can be born safely if patience, wisdom, experience and the right birth positions are applied. Today, sadly, very few women with breech babies are allowed to give birth vaginally by their doctors – mostly due to a lack of experience in knowing how to gently guide the baby out. It’s an artful midwifery practice we are losing – and shouldn't.  I’ll leave it to the sage midwife Ina May Gaskin to explain why.
Posted by Tina Cassidy at 8:33 AM 3 comments:

Call the Midwife: A historical guide to outdated birth practices 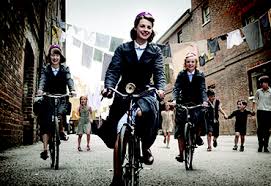 Call the Midwife on PBS is not only a well-written show based on a real-life British midwife’s work in the years shortly after WWII in London’s East End. It is also an excellent way to understand the true nature of midwifery, how childbirth has changed, and how it has not. I’ll be posting several pieces about the series as it unfolds.

One thing that is fascinating to me is seeing birth anachronisms – methods and instruments that are no longer used (for good or bad). And Episode One contains a wealth of examples. First, the midwives give mothers enemas. This practice thankfully fell out of favor decades ago. The rationale behind them was that by cleaning out the mom, the baby would have more room to maneuver and help the labor progress more quickly (as well as prevent soiling during labor). The technique was called “high, hot and a hell of lot,” referring to where to hold the container of hot water and how much to use. But enemas can be painful during labor and they were found to be of no benefit.

Episode One also contains a scene with pubic hair shaving, which midwives and doctors used to do in an effort to make the area more antiseptic. However, many studies later revealed that small nicks from shaving actually introduced germs into the mom’s bloodstream and could cause infection, so it is no longer recommended, except sometimes in c-sections. Phew.

Finally, perhaps the most awful of all of the outdated interventions seen in Episode One is the episiotomy – a scene that will make anyone cringe! -- where a cut is made to make the birth opening larger. These were once routine, but again, many scientific studies have debunked the method, showing that introducing a cut could make a mother tear more deeply and have more pain later when she might not tear at all if left alone.
Posted by Tina Cassidy at 7:30 AM 2 comments: