Get back to work, quick!

I was just reading about France's Justice Minister Rachida Dati, who was back working 5 days after giving birth earlier this month. She's 43. I think her age is a key indicator of this trend of women getting right back into it after having a baby.

Women who wait so long to have their first baby have already established their careers as being central in their lives. And when you have been working at a job so hard for so long, it becomes your whole identity. I think women also feel insecure about losing that identity when they have a baby so they fight their instincts even harder to push themselves out of the house.

Historically, women in many cultures would remain shut in with their babies for quite a long time.

I believe these customs were adaptive behaviors meant to facilitate bonding, establish good breast feeding practices, ensure that the baby thrived, the mother recovered and the newborn was kept removed from potentially dangerous diseases. Of course, today we have nannies, formula and vaccines, but women are still hard-wired to want to stay with their infants, no matter how exhausting.

The problem is, the support system to encourage moms to stay with their newborns has frayed.

Almost every culture throughout time had elaborate rites to encourage women to remain "confined" with their newborns. In Britain, women stayed confined for as long as a month, a celebratory time when new moms were fed special caudles and cocooned among their friends, outside the company of men. The women marked the changing of bed linens in a ceremony called "the upsitting", after which the mother would rest for another 10 days before moving freely inside the house. Even early maternity wards in the UK required 30-day confinements! Whether at home or the hospital, the British postpartum period would officially end with a "churching," a new mother's first trip outside. For that rite (which persisted in some areas until the 1950s) she donned a veil and was surrounded by her midwife, friends and family.

Leaving the house was a big event!

Things started to change when birth shifted in earnest to hospitals around WWII, as two weeks became standard for a lying-in period.

Today, with a vaginal birth in the hospital, lying-in is a day or two.

Birth is always a reflection of the time and place where it happens. In today's world, everything has sped up, even the time we take to recover from and enjoy having a new baby.
Posted by Tina Cassidy at 11:15 AM 4 comments: 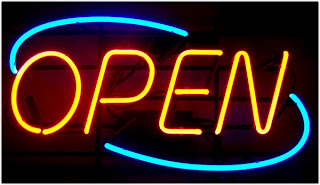 I wrote this poem about a year ago, when I was still pregnant, but my hormone-addled brain promptly lost the thing before I could give it to my midwife. I recently found it tucked into a notebook and am posting it here for all as a sign of my thanks.

Ode to a midwife

The neon sign above her desk says OPEN.
I get the joke and the suggestion.
Beyond the back door, ajar, birds zip and bees buzz in the garden.
On the sidetable near the easy chair
Is a bowl of cherries.
That is not just a metaphor.
It is truth.
She made me art,
A rubbing of two leaves, in blue.
She made me cry, an unlocking of my fears.
She sang a song,
Read a poem,
Told me to pee in a cup
And hop on the scale -
But only if I wanted to.
She listened to the baby's heart,
Heard the beats and hiccups,
Felt a head
And waited patiently for the day that he arrived.
Posted by Tina Cassidy at 6:21 PM 1 comment: