Last night I saw Birth On Labor Day, a play based on real life birth stories collected by Karen Brody. The production, often called the "Vagina Monologues" of childbirth, looks at birth from many perspectives of very different archetypal experiences: The woman who wants an elective cesarean because she's afraid of having an episiotomy; the woman who drew inspiration for a natural birth from the ease with which household pets delivered their offspring; the woman who demanded an epidural, but then thought better of it in subsequent births; the woman that hospital staff had no patience for and told her if she didn't give birth soon, she'd have to have a cesarean, etc. The play was well done -- and I must say -- so evocative of the real thing that it was a very tense roller coaster ride to watch.

After the show, I participated in the talk-back segment. One question haunts me: How will our daughters give birth?

I'd love to hear your thoughts.
Posted by Tina Cassidy at 6:27 PM 6 comments:

An obstetric anesthesiologist flagged this New York Times story for me, noting that Japan's cultural values around pain relief may explain why the country has such a low epidural rate (single digits) compared with high rates here (80 percent in some hospitals).

September 10, 2007
Japanese Slowly Shedding Their Misgivings About the Use of Painkilling Drugs
By DONALD G. McNEIL Jr.
OKAYAMA, Japan — If any nation ought to lead the world in the consumption of painkillers, it is Japan. Its population is aging, and cancer is the leading cause of death. It has universal health insurance, and few restrictions on prescription narcotics. And it is a heavily medicated society; it consumes half the world’s Tamiflu, the anti-flu drug.

Yet, on charts detailing the per capita consumption of narcotic painkillers throughout the world — routinely topped by the world’s richest countries — Japan is down in the neighborhood of Bulgaria and South Africa. It consumes one-twelfth as much per capita as the United States.

The leading reason for that, said Dr. Fumikazu Takeda, a retired neurosurgeon who leads the fight for better pain control, is patients’ fear.

Until recently, morphine was used only in hospitals, and near the end.

“People hate morphine because they think, ‘As soon as the doctor injected morphine, my father died,’ ” Dr. Takeda said.

Also, until recently medical schools taught that narcotics should be used only briefly at low doses.

And some national sense of “gaman” — that suffering in silence is a virtue — persists even in hedonistic modern Japan.

“Long ago, a samurai who complained about pain was considered a very weak samurai,” he said. Young people have other ideas, but with life expectancies over 80, the typical cancer patient is from another generation.

A bunch of boobs

Breastfeeding. You can try it at home, but you can't post it on Facebook. This also reminds me of a recent scuffle the queen of unassisted birth, Laura Kaplan Shanley, had with a YouTube posting of a woman giving birth alone.
http://www.blogher.org/everything-i-never-wanted-know-about-breasts-i-learned-facebook
http://laurashanley.blogspot.com/2007/08/censorship-on-youtube.html
Posted by Tina Cassidy at 5:29 AM 2 comments:

How spending more money can cost more lives.
Posted by Tina Cassidy at 7:05 AM 3 comments:

Now out in paperback 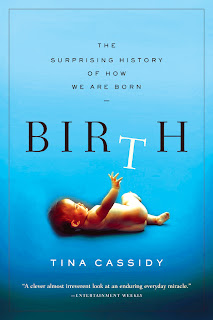 Hopefully, the paperback version of my book will offer to even more people the historical context we need to judge modern maternity practices.
Posted by Tina Cassidy at 4:46 AM 2 comments: