Below is a guest post about pelvic organ prolapse, which recalled for me some historical case studies where uneducated birth attendants would, after the baby was born, yank on an umbilical cord to remove the placenta more quickly, and cause the uterus to come out as well. At the Mutter Museum in Philly, devoted to medical oddities, there were even some gruesome examples of what women had to use as pessaries (including potatoes)!
Anyway, good information and sound advice below, especially as it relates to "mother directed pushing," which means, you push -- or don't push -- as your body feels most comfortable; not when someone else tells you to.
GUEST POST: 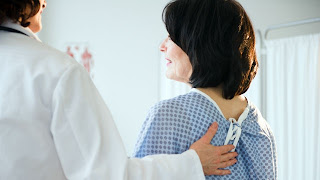 Pelvic Organ Prolapse (POP) is a common condition that affects women between the ages of 50 and 70. In fact, approximately 50 percent of women will be diagnosed with the condition during menopause, when decreasing estrogen levels cause pelvic tissues to become thinner and weaker. The symptoms of POP range from very mild to severe, as do the treatment options. It is important that women understand what POP is, how it can be prevented, and the variety of treatment options available.
Some treatments are significantly more risky than others, so women should become educated to understand the risks and benefits associated with each.
Pelvic Organ Prolapse
Although decreasing estrogen levels during menopause can be the final trigger for POP, there are additional contributing factors. The primary causes of POP are pregnancy and childbirth, although smoking, obesity and a genetic predisposition can also lead to a diagnosis of POP. The condition occurs when weakened pelvic tissues begin to sag, or drop, in the pelvic cavity. In mild cases of POP, a woman will not experience any symptoms. Her doctor usually diagnoses it during a routine pelvic exam.
In moderate to severe cases, connective tissues will begin to detach from the pelvic structure, causing pelvic organs to drop completely and begin to prolapse into the vaginal canal. The organs most commonly affected by POP include the bladder, uterus and rectum.
Some symptoms of POP include:
·        -- an inability to insert a tampon
·        --  a feeling of bulging, or sagging, in the pelvic cavity or vagina
·       --  difficulty beginning to urinate and/or weakened urine stream
·       --  unusual constipation
·        -- pain or discomfort during intercourse
·       --  spotting or light bleeding
Preventing Pelvic Organ Prolapse
There is evidence that POP can be prevented — or the symptoms can be significantly reduced — by maintaining a healthy weight, eating well, exercising and quitting unhealthy habits such as smoking. Women who are pregnant should discuss "Mother-Directed Pushing," as well as their options for delivery positions during their labor. Research has shown that working with a woman's natural birth physiology can reduce conditions like POP and incontinence.
Kegel exercises are also beneficial in promoting pelvic floor health. Women who do Kegel exercises on a daily basis during and after pregnancy have a lesser chance of developing incontinence and/or POP later on.
Treatment for Pelvic Organ Prolapse
Once POP has been diagnosed, women should discuss treatment options with their doctor. They should try non-invasive methods before opting for more risky surgical interventions. Non-invasive methods include:
·        --Physical therapy
-Electrical stimulation of pelvic floor muscles
·        --Vaginal pessary
More invasive methods should only be used for moderate to severe cases of POP in which symptoms are uncomfortable and/or debilitating. One surgical method used to correct POP uses a material called transvaginal mesh. It has been linked to thousands of cases of severe health complications. The mesh product can erode into vaginal tissues, causing pain, infections and even organ punctures (organ perforation). These complications can be impossible to reverse.
There are alternatives to transvaginal mesh surgeries that can be successful in treating POP. Women should discuss their full range of surgical options before choosing the safest and most effective treatment for their symptoms.
Author Bio: Elizabeth Carrollton writes about defective medical devices and medication safety for Drugwatch.com.
Posted by Tina Cassidy at 6:55 AM 2 comments: